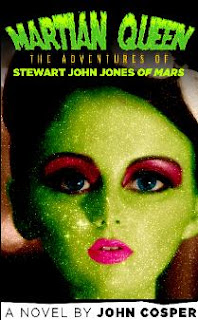 Genre: Science Fiction
Recommendation: Excellent
Originality – 5/5
Writing Style – 5/5
Plot – 5/5
Characters – 5/5
Aesthetics – 3/5
For all the wannabes out there!
What if the stuff you read in your sci-fi novels were true? Or what if you could actually do what your character does in video games? What if you could go to another planet and be a real-life superhero?
That’s exactly what Stewart John Jones of Earth gets to do! He’s a lazy gas station clerk who suddenly gets whisked away to Mars only to find out that everyone there is even lazier than he is. He soon convinces Princess Dayla to marry him, but on their wedding night, the Mountain King and his nefarious robot come and steal her away. Now Jones is on a mission to get her back and to restore the rightful Queen of Mars to her throne. Why him? Because he’s the only person on the whole planet willing to do something!
Martian Queen is a hilarious book with a witty writing style that any fan of the genre can enjoy. There are a lot of references to other pop culture works and if you’re anything like me, you’ll probably find yourself relating quite a bit to the character.
There’s nothing specifically Christian in this book, but it’s a clean and enjoyable read. You could get through it in an afternoon if you wanted to.
A couple of detractors is that there are a lot of typos in this book. Not so many that you can’t follow the story, but I’m sure you’ll note the lack of quality proofreading. Also, the cover shows a green woman. It’s a nice attractive image for the book, but no human-like Martians are green, so it’s a bit disappointing there.
Other than that, it really is a fun book, and quite deserving of an Excellent rating.
Martian Queen: The Adventures of Stewart John Jones of Mars is available in print and ebook formats from Amazon.com.
Visit John’s website!
Get more reviews at Christian Sci-Fi and Fantasy Review!

An alien ship has crash-landed on Earth, setting off a new wave of drug addiction and world war in its wake, while the sole survivor of the wreckage vows revenge against the god-like authorities of his home planet. At the same time, the new president of the GenRes Company is obsessed with living up to his father’s medical success and has just discovered how to transform normal children into Genetically Altered super-humans. Who will control these children? The scientist, the alien, and a couple of ambitious criminals are all eager to keep them for their own use. But Someone else has entirely different plans for them. Follow as each development merges together and a new breed of adolescent superheroes rises to the forefront in book one of The Gifted: In the Beginning.
Read it free or order your copy at
The Gifted Book Series!
Posted by Rev. Stephen R. Wilson at 9:44 AM