After the Cross by Brandon Barr and Mike Lynch Book Review 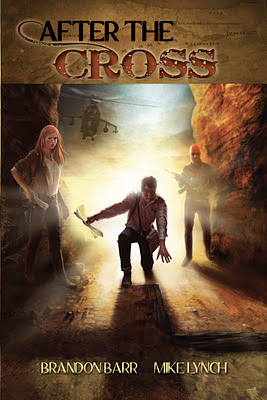 Genre: Christian Speculative/Historical Fiction
Recommendation: Excellent
Originality – 5/5
Writing Style – 5/5
Plot – 5/5
Characters – 5/5
Aesthetics – 5/5
Does the cross of Christ still exist? What would you do to find it?
After the Cross is a non-stop action story of faith and cunning. Archaeologists have discovered a document relating the lost history of the cross. After the death of Jesus, the story describes how the cross was hidden, first by the Jewish authorities and then by Christians themselves. Now two enemies, a washed-up Christian professor and a ruthless black market dealer, have the chance to finally recover it. But should they?
As news of the discovery spreads, so does the danger. Some want the cross for its supposed healing powers, others for the validation it will give to the Christian faith, and some for the fame and fortune it will bring them for finding it. There are others who want to keep the cross hidden for political reasons or to keep believers from placing more faith in the cross than they do in the Christ. These competing factions will stop at nothing to beat each other to the sacred prize. Who will die? Who will survive? And who will end up with the cross in the end?
After the Cross is a thoroughly clean, Christian read that takes a look at real-life human motivations, fears, and faith.
Authors Brandon Barr and Mike Lynch have done a wonderful job of working together to produce a fun, thought-provoking adventure. The characters are rich and dynamic, the plot believable, and the ending perfect. I highly recommend making After the Cross your next read.
After the Cross is available from Ellechor Publishing House.
Visit Brandon’s website! Visit Mike’s website!
Get more reviews at Christian Sci-Fi and Fantasy Review!

An alien ship has crash-landed on Earth, setting off a new wave of drug addiction and world war in its wake, while the sole survivor of the wreckage vows revenge against the god-like authorities of his home planet. At the same time, the new president of the GenRes Company is obsessed with living up to his father’s medical success and has just discovered how to transform normal children into Genetically Altered super-humans. Who will control these children? The scientist, the alien, and a couple of ambitious criminals are all eager to keep them for their own use. But Someone else has entirely different plans for them. Follow as each development merges together and a new breed of adolescent superheroes rises to the forefront in book one of The Gifted: In the Beginning.
Read it free or order your copy at
The Gifted Book Series!
Posted by Rev. Stephen R. Wilson at 4:31 PM