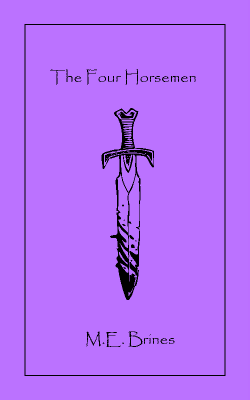 Genre: Christian Fantasy
Recommendation: Excellent
Originality – 5/5
Writing Style – 5/5
Plot – 5/5
Characters – 5/5
Aesthetics – 2/5
Tons of surprises!
A grizzled mercenary, a wizard’s apprentice, and a young prophet walk into a bar…
Sound like a joke? It’s anything but! This is one book that delivers action, thought-provoking dialogue, and a new lens for the Gospel.
Nothing is as it seems on this adventure. M. E. Brines, a prolific writer, takes events, people, and nations from real-life history and turns it all on its head, often using logic to point out the fallacies of many popular theologians, religions, and strands of Christianity. There are also a lot of recognizable elements from fantasy genre that serve to keep things interesting.
All of Brines’ characters are quite realistic and have great backstories that you won’t see coming, except for one…and even then you’ll have to keep guessing until the end to see whether you were right or not.
This is definitely a Christian book, but like I said, things are done a little differently in this book. Go with what the author is doing and I’m sure you’ll appreciate his approach. There are a few, and a mean a few, mild curse words in the book, but that’s the extent of anything offensive. The theology of the book is spot-on and the Gospel message is very clear.
The Four Horseman is available as an e-book from Smashwords.
Visit M. E.’s website!
Get more reviews at Christian Sci-Fi and Fantasy Review!

An alien ship has crash-landed on Earth, setting off a new wave of drug addiction and world war in its wake, while the sole survivor of the wreckage vows revenge against the god-like authorities of his home planet. At the same time, the new president of the GenRes Company is obsessed with living up to his father’s medical success and has just discovered how to transform normal children into Genetically Altered super-humans. Who will control these children? The scientist, the alien, and a couple of ambitious criminals are all eager to keep them for their own use. But Someone else has entirely different plans for them. Follow as each development merges together and a new breed of adolescent superheroes rises to the forefront in book one of The Gifted: In the Beginning.
Read it free or order your copy at
The Gifted Book Series!
Posted by Rev. Stephen R. Wilson at 4:22 PM