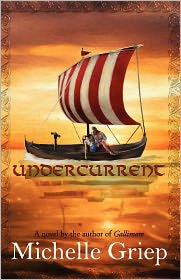 Genre: Christian Fantasy
Recommendation: Excellent
Originality – 5/5
Writing Style – 5/5
Plot – 5/5
Characters – 5/5
Aesthetics – 4/5
A fantastic Viking romance!
When Cassie, a snobby, lonely, middle-aged, career-driven professor magically time-travels to the era of the Viking, more than just her comfort level changes.
Undercurrent is a time-travel story, a love story, a murder mystery, a story of betrayal, and a story of sacrifice. Michelle Griep pulls all of these elements together in one truly engaging volume.
Besides Cassie, the other main characters are two Viking warriors, Alarik and Ragnar. Alarik is accused of murdering his brother in a drunken rage and is forced to flee his village. Ragnar, his cousin and friend, believes in his innocence and goes to find him. Meanwhile, an outside force threatens the village and will stop at nothing until it is completely under his power. Can the two cousins prove Alarik’s innocence? Will they able to rescue the village from this oppressive power?
Undercurrent is a very openly Christian novel and you will not find anything offensive therein. Ragnar is the only believer in Jesus in his entire village. He has suffered for betraying his father’s gods and is ostracized from any position of influence he would normally have. Yet he continues to believe and to witness and to yearn for the salvation of those who despise him. Will his perseverance in Christ be rewarded?
I thoroughly enjoyed Undercurrent. There were a lot of places where the story could have become cliché, but Ms. Griep did a wonderful job of keeping the story fresh and moving forward. I highly recommend it as being an Excellent read.
Undercurrent is available from Risen Books.
Visit Michelle’s website!
Get more reviews at Christian Sci-Fi and Fantasy Review!

An alien ship has crash-landed on Earth, setting off a new wave of drug addiction and world war in its wake, while the sole survivor of the wreckage vows revenge against the god-like authorities of his home planet. At the same time, the new president of the GenRes Company is obsessed with living up to his father’s medical success and has just discovered how to transform normal children into Genetically Altered super-humans. Who will control these children? The scientist, the alien, and a couple of ambitious criminals are all eager to keep them for their own use. But Someone else has entirely different plans for them. Follow as each development merges together and a new breed of adolescent superheroes rises to the forefront in book one of The Gifted: In the Beginning.
Read it free or order your copy at
The Gifted Book Series!
Posted by Rev. Stephen R. Wilson at 2:08 PM