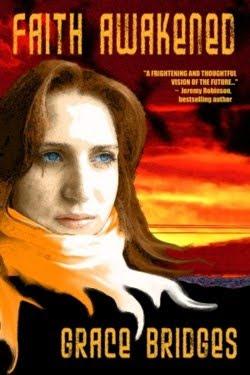 Faith Awakened is a very fast-moving sci-fi novel that takes place in a post-apocalyptic world in which the greed of the elite has finally succeeded in producing a world-wide plague that wipes out all of humanity, except for a few immune survivors. But as futuristic as it is and as much as it uses virtual reality and cryogenics and other now-classic sci-fi elements, the biggest strength of the book for me was its realism in dealing with everyday life and faith issues.

Faith, a girl living in present day, presents questions like, How does someone feel when they sense that God is ignoring them? How do they react when they aren’t getting a ‘calling’ or being spiritually moved when they think they should be? What is it that God is really wanting from us? (Hint: It’s not just for us to all answer some Divine mission in life.)

Mariah, a woman living after the disease has swept the earth like a second Noah’s Flood, has to deal with things like, How do you find hope in the midst of tragedy? How do you accept the gift of life when all you want to do is die? How long can we wait on God to finally fulfill His purposes in this world?

Faith Awakened is sci-fi laced with some very real spiritual struggles, and I highly recommend it to anyone looking for a neat concept and a fondness for in-depth characters.
Anyone who reads it won’t easily forget Faith Awakened.

An alien ship has crash-landed on Earth, setting off a new wave of drug addiction and world war in its wake, while the sole survivor of the wreckage vows revenge against the god-like authorities of his home planet. At the same time, the new president of the GenRes Company is obsessed with living up to his father’s medical success and has just discovered how to transform normal children into Genetically Altered super-humans. Who will control these children? The scientist, the alien, and a couple of ambitious criminals are all eager to keep them for their own use. But Someone else has entirely different plans for them. Follow as each development merges together and a new breed of adolescent superheroes rises to the forefront in book one of The Gifted: In the Beginning.
Read it free or order your copy at
The Gifted Book Series!
Posted by Rev. Stephen R. Wilson at 7:37 PM