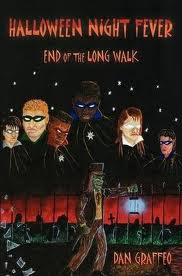 Originality – 5/5
Writing Style – 5/5
Plot – 5/5
Characters – 5/5
Aesthetics – 4/5
Have you ever wondered where the term “Jack O’ Lantern” comes from?
Find out in Dan Graffeo’s teen super hero/horror novel, End of the Long Walk. It takes place in the city of Sleepy Owl, Connecticut, where for hundreds of years, real monsters have been allowed to visit the small town for one night only in order to enjoy the Halloween festivities. Everyone’s all dressed up anyway, so no one knows that there are real vampires and other mythical monsters among them.
Except for the Pniese, the Monster Cops. Most of the monsters and creatures that visit our world are friendly and just want to party for the night, but for those that may want to be a little more mischievous, or downright evil, these teenagers are there to knock them back in line.
With great monsters, laugh-out-loud dialogue, a quick pace, and plenty of super hero action, End of the Long Walk makes for a very enjoyable Halloween read. I would, however, suggest reading The Cir-Cuss Comes to Town before picking this one up, as that is chronologically first in the series.
Halloween Night Fever is not a Christian novel in any specific way, but it is a pretty clean read. There are a couple of curse words and a few instances of taking the Lord’s name in vain, but other than that, you shouldn’t find too much to object to.
Halloween Night Fever: End of the Long Walk is available from HalloweenNightFever.com.

Read it free or order your copy at
The Gifted Book Series!
Posted by Rev. Stephen R. Wilson at 7:49 AM