Faith & Fairies: Book One of The Father Tree Tetralogy by C. S. Haviland 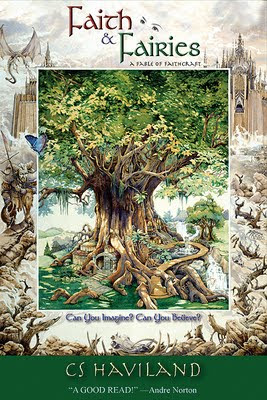 A hilarious, action-packed adventure!
Three very different orphan boys are on their way to a new Home in the small town of Haviland Hollow. Terry is a sixteen-year-old, overconfident, independent spirit. Scott is the fourteen-year-old worry wart with coke-bottom glasses, and Ronnie is…well, Ronnie is a nine-year-old boy, complete with an utter distaste for girl cooties and a love for all things exciting.
The adventure begins when Terry decides that he doesn’t want to go to a new orphanage and takes the other two boys, unknown to them, along on his escape. Terry’s plans are cut short, however, when they meet a group of magical, female, fairies. It seems that God plans to use these unlikely boys to help the fairies overcome their greatest peril.
With laugh-out-loud dialogue, deep characterization, original creatures and ideas, and non-stop action, Faith & Fairies is a definite win for readers of all ages.
The novel is definitely faith-based, but is not a hit-you-over-the-head treatment of spirituality and is appropriate for any reader.
I give Faith & Fairies a recommendation of Excellent and encourage anyone who’s looking for a fun, Christian, fantasy tale to pick this one up immediately. You’ll definitely enjoy it.
Faith & Fairies: Book One of The Father Tree Tetralogy is available from LegendMaker Scriptoria.
Visit the Faith & Fairies website! or Visit C.S.’s website!
Get more reviews at Christian Sci-Fi and Fantasy Review!

An alien ship has crash-landed on Earth, setting off a new wave of drug addiction and world war in its wake, while the sole survivor of the wreckage vows revenge against the god-like authorities of his home planet. At the same time, the new president of the GenRes Company is obsessed with living up to his father’s medical success and has just discovered how to transform normal children into Genetically Altered super-humans. Who will control these children? The scientist, the alien, and a couple of ambitious criminals are all eager to keep them for their own use. But Someone else has entirely different plans for them. Follow as each development merges together and a new breed of adolescent superheroes rises to the forefront in book one of The Gifted: In the Beginning.
Read it free or order your copy at
The Gifted Book Series!
Posted by Rev. Stephen R. Wilson at 7:06 PM