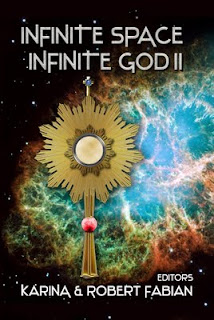 ISIG 2 is a collection of twelve short sci-fi stories written by (for the most part) Catholic writers and positively portraying Catholic characters (such as nuns and priests). The editor, Karina Fabian, provides three of the stories herself.

On the positive side, four out of the twelve stories are amazing. Andrew M. Seddon’s “The Ghosts of Kourion”, the volume’s initial piece, is emotionally brilliant. It follows a time-traveling historian into the distant past, where he is forced to relive his own life’s tragedy through the circumstances of a different era. “Otherworld” by Karina Fabian is imaginative, edgy, and poignant, as it brings us into the captivating world of online virtual reality. Alex Lobdell’s “The Battle of the Narthex” features great characterization, speculation, and suspense as it follows an old soldier’s assignment in guarding the awkward and unwanted prince. The story’s supernatural ending is exceptionally chilling. Finally, “Tenniel” by Colleen Drippe is simply an example of fantastic story-telling. It is adventurous and provocative, showing us the hard decisions that a bishop has to make when he comes face to face with a brutal alien tyrant. Those are the positives and they are strong positives. Unfortunately, those four stories only represent a third of the book’s content.

On the negative side, seven of the remaining twelve stories range from decent to hokey and the last story is a down-right chore to read. The seven all contain good writing and were somewhat enjoyable to read, but are lacking a bit in plot. They’re not horrible. They’re just not that great either.

The last story, “Dyads”, by Ken Pick and Alan Loewen, has a fairly interesting story behind it, but has very little characterization and is so wordy, uses so much jargon, obscure language, and made-up terms, that it is actually difficult to read. The worst part about it is that this chore of a read makes up nearly twenty-five percent of the book’s length. Eesh!

Finally, you also have to be careful about reading the editors’ introductions to the stories. I found that these intros, while well-written and informative, often gave away the most surprising aspects of the story.

Over all, I’d say skip this volume were it not the four stories mentioned above. Recommendation: Average.

Read it free or order your copy at
The Gifted Book Series!
Posted by Rev. Stephen R. Wilson at 9:31 PM