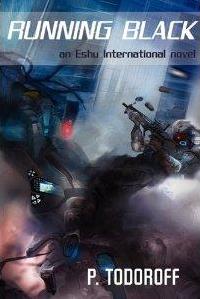 An R-rated, Christian, corporate espionage thriller. Sound like an oxymoron? Maybe not.

In age of clones and corporate domination, Eshu International is an elite black ops team, complete with all the best weapons and technology money can buy. And they will do anything for anyone who has the money. Things get a little complicated, however, when one of their highest-paying missions yet turns out to be not just stealing some company’s newest technology, but kidnapping a human child as well.

The action is fast-paced, the story intriguing, and the characters well-developed. There are also some very significant spiritual, Christ-honoring moments at the end. Any reader will be well-pleased with the story over-all.

Now for a few warning notes: The main characters are all likeable, but they’re not the sort of people you really want to root for. This is not a good-guy versus bad-guy kind of book. It’s a bad-guy versus bad-guy kind of book. The main characters, while not being totally evil, are, for the most part, ruthless killers who swear worse than sailors. Let me stress that point for a moment. If you are offended by profanity, think twice before picking up this novel because there is a LOT of profanity.

And whereas there are a couple of Christian characters who talk a good game, they are somewhat unbelievable in that they are still willing to hide and aid these brutal mercenaries and even want their son to join them! I understand that these two Christians are old friends of our main characters and that they also used to be involved in the same sorts of things before their conversion. Nevertheless, their actions in the book make them seem rather hypocritical.

Finally, Patrick Todoroff’s has a very natural writing style, but unfortunately, the proofreading on this book leaves something to be desired. Every once in a while you’ll come a cross a missing or misplaced word or punctuation mark. It doesn’t distract from the story, but you will notice it.

Overall, I’m giving Running Black a recommendation of Good and will be looking forward to the sequel, Shift Tense (hopefully without so much foul language), coming out soon.

Running Black is available in print and as an Ebook from Amazon.com.

Read it free or order your copy at
The Gifted Book Series!
Posted by Rev. Stephen R. Wilson at 9:39 PM