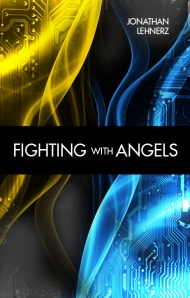 An adolescent girl who’s a scientific genius, a crippled military man, and a failed preacher don armored, robotic suits and enter the spiritual realm to fight demons alongside their guardian angels. Sound like the beginning of a joke? Think again! It’s actually a very fun and interesting idea that the talented Mr. Lehnerz pulls off with great skill.
On the negative side, the book is a little slow getting to the actual action. Most of the story revolves around conversations that the various characters are having concerning themselves and the discoveries that they’re making. There’s also a bit of repetition as different characters are informed of certain developments. Finally, it seems that there are times when certain technical details could have been left out or explained more briefly, perhaps in the midst of an action sequence when that bit of information was being used.
On the positive side, Mr. Lehnerz does an excellent job of creating a sense of mystery from the very beginning. He definitely makes us want to read on.
On the spiritual and moral fronts, I can say that this is a very clean book and that there a lot of interesting spiritual discussions taking place throughout. You may not always agree with every opinion the characters hold (the minister in the story didn’t believe in angels nor does he believe in a literal six-day creation, etc.), but I enjoyed the point that Mr. Lehnerz made. These controversial subjects are not salvation issues. Christians don’t have to believe everything exactly right to be saved. (Thank God!)
As the appearance of the book goes, it is a very attractive volume. The cover elegantly illustrates a main theme of the book and Mr. Lehnerz himself provided the impressive interior illustrations. (The whole book isn’t illustrated, but there is a picture every so often to illustrate a key event.)
This book is probably most suitable for youth readers, but I certainly enjoyed it as well.
I’m giving Jonathan Lehnerz’s Fighting with Angels a recommendation of Good. If you want a fun read or are especially interested in the spiritual realm, check this one out.
Fighting with Angels is available from Tate Publishing.
Visit Jonathan's website!
Get more reviews at Christian Sci-Fi and Fantasy Review!

Read it free or order your copy at
The Gifted Book Series!
Posted by Rev. Stephen R. Wilson at 9:23 PM