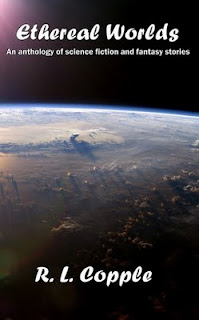 Originality – 5/5
Writing Style – 4/5
Plot – 3/5
Characters – 2/5
Aesthetics – 3/5
A mixed bag of good story-telling and bad jokes.
Ethereal Worlds is a collection of 25 short stories by Rick Copple, about half of which are sci-fi and half are fantasy.
On the positive side, I especially enjoyed “Weapons of War”, a story in which a space-fighter pilot gets stuck in a time loop and has to fight his way back, “Justice in the Balance”, an action story about government corruption and the people who stand up against it, “Dragon Stew”, in which a knight dragon-slayer falls in love with a dragon, “Lady of the Lake Employment Office”, a tale about King Arthur’s mystical benefactress handing out new jobs, “The Peasant’s Rule”, in which a teenager magically swaps bodies with the aged king and gets his chance at making the laws, and “Clever Love”, in which an elf becomes very creative in his quest to win the king’s daughter as his bride.
Other notable themes include spy stories, rebel priests, knights voluntarily being eaten by dragons, magical body-swaps with insects and symbiotic relationships with space-worms, and a boy who learns what it means to be a real super-hero.
Unfortunately, the remainder of the stories read more like a joke rather than a classic sci-fi or fantasy tale. Have you ever heard someone tell kind of a corny joke, and even though you knew it wasn’t funny, it made you smile a little anyway? These humor stories are kind of like that. They’re slightly amusing, but nothing really exceptional. You’ve got super-hero parodies, toilet humor, monkey terrorists, laser shots to the crotch, delusionals and schizophrenics, tame zombies, a movie buff who somehow uses real props, and a new theory on where babies come from. Like I said, entertaining ideas, but not quite on par with everything else Rick has done.
On a whole, it seemed like most of these stories were strong on concept and plot/punchline, but lacking in character depth.
Overall, I’m giving Ethereal Worlds a recommendation of Average.
Ethereal Worlds is available from RLCopple.com.
Visit R.L.'s website!
Get more reviews at Christian Sci-Fi and Fantasy Review!

Read it free or order your copy at
The Gifted Book Series!
Posted by Rev. Stephen R. Wilson at 9:14 PM