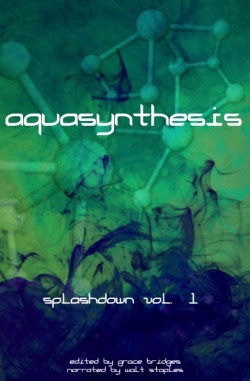 Genre: Christian Fantasy / Christian Science Fiction
Recommendation: Good
Originality – 5/5
Writing Style – 5/5
Plot – 3/5
Characters – 5/5
Aesthetics – 5/5
Some great stories by some of the best Christian sci-fi and fantasy authors working today!
Aquasynthesis is a collection of short stories with an added twist. We are reading each story through the eyes of a young girl whose parents have been murdered and her teacher is showing her these stories to help her cope with her desire for revenge.
As with any collection of short stories, some will stand out to you more than others. Some are humorous, some serious; some are excellent stories with simply fantastic writing, others leave you wanting as incomplete stories or wondering what they have to do with the theme of the young girl and her teacher.
That being said, let me tell you give some of the highlights of why you should read this collection:
A very poetic look at life in “Bob”, an artificial intelligence computer program that gains consciousness, by P. A. Baines
Grace Bridges’ “Second Site”, a humorous story that any video game or computer game lover is sure to enjoy
“Between the Pages” and “The Artist” by Kat Heckenbach, two very enjoyable stories of young girls learning how to use magic
Caprice Hokstad’s realistic and moving tale of a young girl being sold into slavery, “Fettered Soul”
A woman who learned how to get more than twenty-four hours in a day in “A Stretch of Time” by Grace Bridges
P. A. Baines’ Twilight Zone-reminiscent story of a man who becomes fixated with “Ears” or “The Field Trip”, in which a couple of aliens make a big mistake
Travis Perry’s “Gravity”, which explores the unique perspective of the Alzheimer’s patient
“Your Average Ordinary Alien” by Adam Graham in which loser fan-boy Kirk Picard Skywalker finally meets a real-life alien, but the experience isn’t exactly what he was hoping for
Over all, I’m giving Aquasynthesis a recommendation of Good. You won’t love every story, but the ones you do are well worth the read.
Aquasynthesis is available from Splashdown Books.
Get more reviews at Christian Sci-Fi and Fantasy Review!

An alien ship has crash-landed on Earth, setting off a new wave of drug addiction and world war in its wake, while the sole survivor of the wreckage vows revenge against the god-like authorities of his home planet. At the same time, the new president of the GenRes Company is obsessed with living up to his father’s medical success and has just discovered how to transform normal children into Genetically Altered super-humans. Who will control these children? The scientist, the alien, and a couple of ambitious criminals are all eager to keep them for their own use. But Someone else has entirely different plans for them. Follow as each development merges together and a new breed of adolescent superheroes rises to the forefront in book one of The Gifted: In the Beginning.
Read it free or order your copy at
The Gifted Book Series!
Posted by Rev. Stephen R. Wilson at 3:21 PM