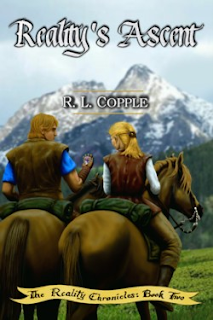 Reality’s Ascent is a definite win!
As the sequel to Reality’s Dawn, this second installment in R. L. Copple’s The Reality Chronicles is even better than the first. Twenty years after the conclusion of Reality’s Dawn, Sisko has married Gabrielle and raised a son and daughter with her. He is still wearing the ring given to him in the steam house, but is performing no miracles with it. He has been unable to use it in that manner since his abuse of it in the last book and is still dealing with the consequences of that error. Trouble soon comes, however, when someone tries to take the ring from Sisko and use it for themselves.
This is a fast-paced action story from start to finish as Sisko and his family battle wizards, supernatural beings, trolls, and more in order to defend the gift God has given them. It is a story of love and family, of temptation and healing.
I particularly enjoyed seeing how some of the more minor characters from the first book have developed over the years and the humorous and realistic interaction between Sisko’s son and daughter. The sibling relationship truly is like no other.
If you’re looking for a good, clean Christian read with plenty of story and a great message, this is it!
I give Reality’s Axcent an Excellent recommendation. Just make sure you read its predecessor, Reality’s Dawn, first in order to appreciate it fully. (You can read my review of Reality’s Dawn here.) I will definitely be looking forward to the next installment from R. L., Reality’s Glory.
Reality’s Dawn is available from Splashdown Books.

Read it free or order your copy at
The Gifted Book Series!
Posted by Rev. Stephen R. Wilson at 8:58 PM