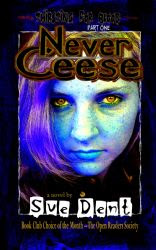 Can werewolves and vampires be saved? That’s the question in Sue Dent’s novel, Never Ceese.

This is a Christian fantasy novel about a werewolf named Ceese and a vampire named Richard, who are both on a mission to break the curse of what they are and regain their salvation. It’s captivating, edgy, humorous, and realistic – the perfect combination of light and dark. I especially appreciated the tangibility of each of the characters. They are dynamic and memorable and Sue has a wonderful gift for taking us inside each of their minds to make us feel what they feel.

The story begins in early America and quickly brings us to modern day. Among Ceese and Richard’s allies are an old, psychic woman, her great-granddaughter, and some surprising characters from the past.

Their enemies include their darker natures, a scientist who wants to learn how he can use their curse to live forever himself, and three questionable college students.

If you’re looking for a great read with werewolves and vampires, look no further! Stephenie Meyer has nothing on Sue Dent! And look for the sequel, Forever Richard, which will be reprinted soon.

Read it free or order your copy at
The Gifted Book Series!
Posted by Rev. Stephen R. Wilson at 4:43 AM