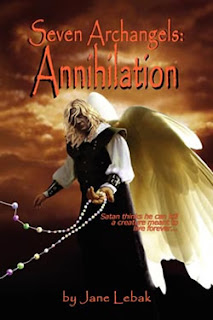 This is a book you might have missed, but shouldn’t have. The classical struggle of good against evil becomes even more dangerous as angels are forced to fight for their lives in Jane Lebak’s Seven Archangels: Annihilation.

Jane combines humor, action, and a unique take on the angelic host as she helps us to imagine what it would be like if Satan and his demons discovered a way to unmake an angel.

The angel characters in this book are not the perfect, stoic saints we normally envision. They are much more human, though undoubtedly more powerful than any human was created to be. They often disagree with one another, get jealous and angry with each other, and even question God from time to time. As in normal human life, God is often on the sidelines in this book, regularly offering guidance and comfort, but usually leaving it up to His followers to handle the hands-on stuff. The great thing about God in this book is that whereas the angels are often afraid and unsure, God never is. He is in complete control the entire time.

Even so, there is a definite sense of urgency in the book. Although the reader trusts that God is ultimately in control, we never know how far God is willing to let a situation escalate. There is a very poignant scene in which God commands one of His angels to let another angel die and we see how challenging that is to the character’s faith.

The main angel characters, such as Gabriel, Remiel, Raphael, and Michael are very easy to identify with and they are, in many instances, familiar names from Scripture and Christian legend. So the reader definitely finds themselves caring about what happens to these characters. There is even a cameo appearance by the Apostle Peter and a rather large supporting role given to Mary, the mother of Jesus.

One thing I hate about a book is an unsatisfying ending and Jane certainly doesn’t disappoint with this one. The last battle will keep you guessing as you dread what will happen to two of the main characters and the resolution and epilogue are well worth the wait.

With that said, I do have a couple of detractors to mention. First, the angels in this book are all organized into different groups with different abilities given to them and they are able to bond and communicate with one another in special ways. Whereas this is all very interesting and indeed forms a large part of the subplot, it also seems to get a little too complex, especially in the beginning, as Jane’s humorous foreword addresses. Still, as long as you don’t get too hung up on trying to figure everything out and instead just let the story carry you along, you should be fine.

The other questionable material involves the way in which two angels or two demons are able to bond with one another. The relationship seems to resemble a human romance more than a platonic friendship. There is one scene, for instance, where the imagery of how one demon is attacking another almost sounds like a rape. Later, these same two demons, both described in the masculine, are very obviously flirting with one another as one sits on the others’ lap. I don’t think this should keep you from reading the book, but it is something you will most probably notice. In the author’s defense, angels do not necessarily have to relate to one another in the same way that humans do and these scenes may even have been purposefully inserted here to show how the demons are even unable to love one another properly.

As far as the aesthetics of the book go, the cover does depict a key theme of the story, but the art is not very impressive. The interior is of a standard, professional quality.

As I said at the beginning, this book is definitely worth picking up and I look forward to Jane’s next installment, hopefully coming out sooner rather than later. I give Seven Archangels: Annihilation a recommendation of Excellent.

Read it free or order your copy at
The Gifted Book Series!
Posted by Rev. Stephen R. Wilson at 9:21 AM