"Blood and Brine: Book 3 of the Ascendancy Trilogy" by Caprice Hokstad Book Review 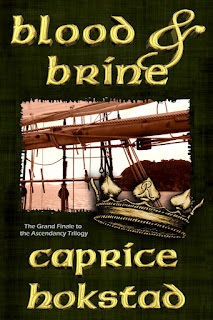 
Caprice Hokstad wraps up her Ascendancy Trilogy masterfully. There’s war, plague, creative military tactics, Joseph-style economics, a mass murder mystery, assassins, betrayal, and the divinely-inspired birth of modern medicine, all of which will keep on the edge of your seat and wanting more.


kee, Timna, Duke Vahn, Captian Shil, Lord Blackthorn, Pharn Patkus, and King Arx all feature grandly in this final volume. With some new roles and some new revelations, you won’t want to miss what happens to each of them, or to the Kingdom of Latoph.


Of course, the question is, Will the Duke finally get the crown? Well, I won’t give it away, but I will say that I think you’ll be very pleased with the ending.


With the end of the Ascendancy Trilogy, we can only hope that Caprice will be spinning us a new tale shortly, but if you need more Hokstad in the meantime, you can check out her fan-fiction at http://underseaadventure.net/ .


Blood and Brine is available from Splashdown Books

An alien ship has crash-landed on Earth, setting off a new wave of drug addiction and world war in its wake, while the sole survivor of the wreckage vows revenge against the god-like authorities of his home planet. At the same time, the new president of the GenRes Company is obsessed with living up to his father’s medical success and has just discovered how to transform normal children into Genetically Altered super-humans. Who will control these children? The scientist, the alien, and a couple of ambitious criminals are all eager to keep them for their own use. But Someone else has entirely different plans for them. Follow as each development merges together and a new breed of adolescent superheroes rises to the forefront in book one of The Gifted: In the Beginning.
Read it free or order your copy at
The Gifted Book Series!
Posted by Rev. Stephen R. Wilson at 7:56 AM