The Relics of Nanthara: Book 2: Sacrifice of Heroes by Nick Giannaras Book Review 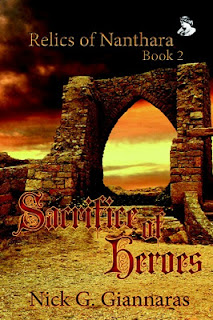 Genre: Christian Fantasy
Recommendation: Excellent
Originality – 5/5
Writing Style – 5/5
Plot – 5/5
Characters – 5/5
Aesthetics – 3/5
Giannaras doesn’t pull any punches!
Most sequels don’t rise to the quality of their predecessors, but Sacrifice of Heroes is the exception. Book 1, Secrets Revealed, definitely had a lot going for it and Sacrifice of Heroes capitalizes on that and takes the storytelling to next level.
With the Crown of Sovereign successfully in hand, our mixed party of heroes must now make it safely back to their allies without the Dark One intercepting their prize. Along the way, they’ll hazard adventure after adventure, meeting interesting and dangerous people and maybe even finding more clues on who the Dark One is and how to defeat him.
With trolls, savage beasts, skeleton zombies, and evil sorcerers standing in their way, who will make it home alive? What new allies will they gain along the way? And who will still be standing at the end of the Dark One’s attack?
Besides the epic and action-filled plot, the interaction between Giannaras’ characters continues to be a high point. Whereas there’s not as much humor in this one, you’ll still enjoy the love-hate relationship between many of the party members.
I’m giving Nick Giannaras’ The Relics of Nanthara: Book 2: Sacrifice of Heroes a recommendation of Excellent. If you haven’t read Secrets Revealed, pick it up and then hurry on Sacrifice of Heroes. I’m sure you’ll enjoy the ride.
Sacrifice of Heroes is available as an e-book from MuseItUp Publishing.

An alien ship has crash-landed on Earth, setting off a new wave of drug addiction and world war in its wake, while the sole survivor of the wreckage vows revenge against the god-like authorities of his home planet. At the same time, the new president of the GenRes Company is obsessed with living up to his father’s medical success and has just discovered how to transform normal children into Genetically Altered super-humans. Who will control these children? The scientist, the alien, and a couple of ambitious criminals are all eager to keep them for their own use. But Someone else has entirely different plans for them. Follow as each development merges together and a new breed of adolescent superheroes rises to the forefront in book one of The Gifted: In the Beginning.
Read it free or order your copy at
The Gifted Book Series!
Posted by Rev. Stephen R. Wilson at 10:42 AM