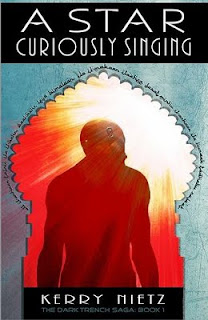 I have a riddle for you. What is A-not-A cubed?

Have an answer? No?


Okay, how about a simple question, then? How would you like to be able to talk to machines? I mean, really talk to them. Speak their language and command them telepathically. Or what if you could connect to the internet instantly and download information all in your mind? Sandfly can do just that, but it’s not as great as it sounds. Sandfly is a slave, as are all persons who have been given such an ability. The Muslim rulers of the world have implanted a computer chip into Sandfly’s brain to give him special access to machinery, but also to control what he thinks about and what he does. Now they want him to solve the most challenging technical problem of his career. Muslims have just taken their first, secret voyage into deep space. While there, one of their robots committed suicide. The crew is also acting strangely. Now tt’s Sandfly’s job to find out why.

A Star Curiously Singing is an intriguing mystery, love story, Asimovian sci-fi tale, and Gospel presentation all perfectly blended into one adventure. The main character, Sandfly, is not a particularly likeable character, but he is a believable character given his circumstances. The author makes it easy to relate to him as the entire story is told from Sandfly’s perspective and the predicaments he finds himself in will definitely keep your interest.

I will caution you, though, that if you’re like me, you may feel a little lost with all the new terms and concepts that the author introduces in the first few pages. But don’t worry. Everything will eventually become clear, including that riddle at the beginning, so just keep reading.

A Star Curiously Singing is an absolutely clean read that gets to the heart of the Christian Gospel. What does it mean to have a God who is so glorious and beyond anything that we can deserve or imagine, but who yet wants to communicate and commune with us?

A Star Curiously Singing is every bit an Excellent novel. The great thing about it is that Nietz makes it clear that this is just the beginning for Sandfly and I, for one, am certainly looking forward to reading more of The Dark Trench Saga in the sequel, The Superlative Stream.

A Star Curiously Singing is available from Marcher Lord Press.

Read it free or order your copy at
The Gifted Book Series!
Posted by Rev. Stephen R. Wilson at 8:47 PM