"Journals of the Peregrine (Volume 2): Dictates of Conscience" by Carol Parsons Book Review 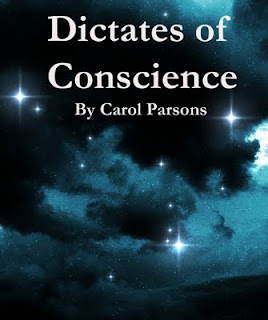 Siph Gaillon, governor of the Imperium planet, Vedra Epsilon, wants to limit the Believer population. He has issued a decree stating that persons wanting to have a child must apply for a birthing permit. He then denies the applications brought to him by Believers.

The Believers, however, continue to have children without the permits and without the aid of medical professionals. They then must hide their children from the authorities and often entrust them to Guardians who will keep and protect their children.

One of these Guardians is a woman named Brietta. She will soon be joined in her efforts by Patriots, Kynan and Ganet. Can they keep the children safe from Gaillon? Will they have to evacuate Vedra Epsilon, or will the Patriots and Guardians join forces to overthrow the governor?

Dictates of Conscience certainly has a lot going on and it’s loaded with action. Unfortunately, I felt lost most of the time while I was reading it. The characters and problems weren’t very well defined. Why is the Imperium so against Believers? How did the Imperium rise to power? Who are Kynan and Ganet? The author introduces all of these concepts, but fails to give sufficient background for the reader to appreciate them.

The action and ideas are all a bit cliché, as well. The Patriots and Imperium smack a bit too heavily of the Star Wars’ Empire and Rebels. The action revolves around characters breaking into or out of jail, impersonating officials, and uncovering traitors, all of which has been done. In the end, though, it isn’t even the heroes who save the day. Rather, they become somewhat of a side story for the final sequence.

I did like, however, the frustrated love scene at the end.

Dictates doesn’t have anything objectionable in it and does present some very strong examples of characters placing their faith in God.

Over all, I give Dictates of Conscience a recommendation of Average. It’s a fun read with some good action, but it’s not for the most discerning reader.

Journals of the Peregrine (Volume 2): Dictates of Conscience is available in print and e-book formats at Amazon.com.

Read it free or order your copy at
The Gifted Book Series!
Posted by Rev. Stephen R. Wilson at 11:40 AM