"Jerome and the Seraph" by Robina Williams Book Review 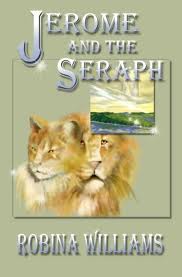 Brother Jerome is dead. So now what should he do?
Robina Williams’ Quantum Cat series, of which Jerome and the Seraph is first, revolves around a group of friars and their pet cat, Leo, living in the English countryside. When one of the friars dies, however, he finds himself in an afterworld that he never expected and must now rely on his old feline companion to help him navigate his way around the afterlife.
Meanwhile, the rest of the brothers become rather concerned about the head of their local friary, Father Fidelis. Some surmise that the priest is terminally ill. Others believe he’s having an affair with the new woman who’s moved into town.
Blending mystery, humor, and a wee bit of heresy, Robina delivers a very pleasant read in Jerome and the Seraph. The plot may seem a bit slow to some, but remember, life in the friary isn’t supposed to be fast.
More conservative readers should note that the characters do take the Lord’s name in vain and use mild curse words to a limited extent. There is also a Christianized reference to the mythological gods. Finally, as Brother Jerome discovers, the afterlife described in this book may not be the Heaven that you would expect.
Overall, I give Jerome and the Seraph a recommendation of Good and will look forward to reading the rest of Robina Williams’ Quantum Cat series, Angelos and Gaea.
Jerome and the Seraph is available from Twilight Times Books.
Visit Robina's website!
Get more reviews at Christian Sci-Fi and Fantasy Review!

Read it free or order your copy at
The Gifted Book Series!
Posted by Rev. Stephen R. Wilson at 9:28 AM