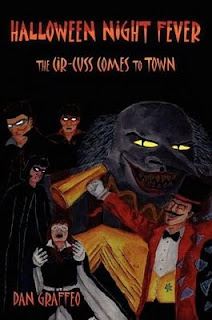 A fun horror novel with plenty of action and great characters!

Cindy Daniels is an immature, irresponsible, boy-crazy cheerleader. She’s also a teenage super-hero, at least on Halloweens. Every Halloween, supernatural and undead beings of every variety come to visit the town of Sleepy Owl and the Halloween Night Warriors, better known as Monster Cops, are always there to keep the peace. This Halloween, a demon clown named Punchinello has it in for Cindy, but she has no idea why. Can Cindy and the Monster Cops figure it out before it’s too late?

From a Christian perspective: Though the author is a Christian, there isn’t really anything in the novel to set it apart as being a specifically Christian work. There is holy water involved (being shot out of squirt-guns at the monsters, which I love) and a demon is featured as the main baddie, but that’s about it. The demons don’t go to Hell per se and whereas the characters develop, none of them address any real faith issues. There are also some references to Native American mythology and a moderate use of the characters taking the Lord’s name in vain.

Halloween Night Fever: The Cir-cuss Comes to Town is available from HalloweenNightFever.com.

Read it free or order your copy at
The Gifted Book Series!
Posted by Rev. Stephen R. Wilson at 4:23 AM