Gateway to Gannah: Book 1: The Story in the Stars by Yvonne Anderson Book Review 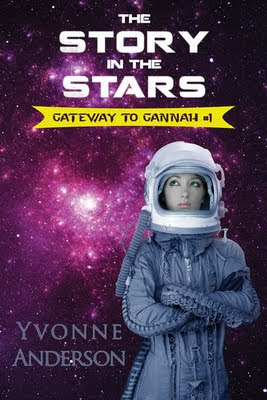 Originality – 5/5
Writing Style – 5/5
Plot – 5/5
Characters – 5/5
Aesthetics – 4/5
The more I read, the more I liked!
Dassa is the last of her race. Her world has been destroyed by a plague and the only one who can save her is Doctor Pik, a man who would rather have her entire race die with her. In fact, it was Dr. Pik’s people who created the plague in the first place.
The Story in the Stars is a dynamic first novel. It’s a story of grace, it’s a story of obedience, it’s a treasure-hunting story, it’s a love story, and it’s a story with an absolutely perfect ending.
Yvonne Anderson has created deep characters with an interesting back story. She tells her tale through rich descriptions, natural conversations, and a well-placed bit of humor every now and then.
The Story in the Stars is a poignant illustration of the Christian message. Most importantly, it delivers a fine example of how to offer forgiveness to those who have hurt us and what it means to sacrifice for the cause of Christ. It shows us what it means to struggle with our beliefs and how to handle our faith in the face of tragedy. If that weren’t enough, there’s even a guest appearance by the great American revivalist Jonathan Edwards!
As you read, you may find some things that seem odd, like the fact that the aliens often speak in King James English, but don’t worry – it will all make sense.
The cover is good – it depicts the main character very well when she’s in certain moods – I just wish it showed more action or included Dr. Pik along with her (a good six-fingered, non-facial-expressive alien image would have been a nice touch).
Overall, I feel very confident in recommending The Story in the Stars with a rating of Excellent. It will be interesting to see what Yvonne does with our very opposite characters next.
Gateway to Gannah: Book 1: The Story in the Stars is available from Risen Books.
Visit Yvonne’s website!
Get more reviews at Christian Sci-Fi and Fantasy Review!

An alien ship has crash-landed on Earth, setting off a new wave of drug addiction and world war in its wake, while the sole survivor of the wreckage vows revenge against the god-like authorities of his home planet. At the same time, the new president of the GenRes Company is obsessed with living up to his father’s medical success and has just discovered how to transform normal children into Genetically Altered super-humans. Who will control these children? The scientist, the alien, and a couple of ambitious criminals are all eager to keep them for their own use. But Someone else has entirely different plans for them. Follow as each development merges together and a new breed of adolescent superheroes rises to the forefront in book one of The Gifted: In the Beginning.
Read it free or order your copy at
The Gifted Book Series!
Posted by Rev. Stephen R. Wilson at 12:39 PM