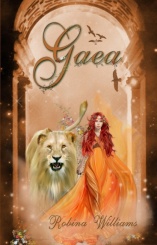 Amazing! Playfully imaginative!
Gaea takes the gods and goddesses of myth and brings them under the creation and dominion of the one, true God.
Gaea, the earth goddess, Mother Nature herself, is frustrated with humankind’s wanton use of the earth’s natural resources and utter disregard for the other creatures of this world. She wants to punish the humans for not respecting creation as they should and begins visiting other deities, asking for their help in her campaign against humankind. The question is, how far will God let her go? And will humans ever really change their ways?
Gaea is both humorous and spiritually insightful. Robina Williams shows us a great picture of God and provides a strong presentation of the Gospel message.
The one problem I found with the book was its slow-moving plot. The narration becomes very repetitive as we are told over and over again how Gaea feels versus how God feels. Many of the conversations and scenes continue well beyond the point of providing new information.
Overall, I give Gaea a recommendation of Good and will look forward to reading the rest of Robina Williams’ Quantum Cat series, of which Gaea is the third.
Gaea is available from Twilight Times Books.
Visit Robina's website!
Get more reviews at Christian Sci-Fi and Fantasy Review!

Read it free or order your copy at
The Gifted Book Series!
Posted by Rev. Stephen R. Wilson at 9:44 AM