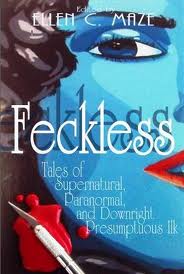 Originality – 4/5
Writing Style – 4/5
Plot – 4/5
Characters – 5/5
Aesthetics – 5/5
Vampires, Werewolves, and Ghosts, oh my!
Meet a woman who can kill you with a single touch, a man who is friends with Death and a dying dragon, an alien preacher, a very special magician, a man who just can’t leave his ex alone, a woman who loves her husband despite his being possessed, a serial killer who gets exactly what he deserves, and more.
Feckless was put together by Ellen Maze, Christian vampire author extraordinaire, and many of the stories are of her own creation, which is a definite plus for the book.
Like most short story collections, there are some pieces in this volume that you’ll enjoy more than others, but I believe there is enough good stuff here to satisfy any horror fan.
A few of my favorites were “dtour” by Kevin Maze, and “88” and “Bully” by Ellen Maze. “dtour” is neat because the story is told all in text messages being sent between two people. “88” is a very touching tale about a man preparing for his 88th birthday party. “Bully” is an effective story that jumps from following the victim of a neighborhood bully to a serial killer to a werewolf and back around again.
Many of the stories in this collection also contain a strong Christian message.
I give Feckless a recommendation of Good and encourage any horror fan to pick it up. It’s well worth it.
Feckless is available at EllenCMaze.com.
Get more reviews at Christian Sci-Fi and Fantasy Review!

Read it free or order your copy at
The Gifted Book Series!
Posted by Rev. Stephen R. Wilson at 4:15 AM