"Discovery in the Desert: It Will Shake the Nations" by Tom Thiele Book Review 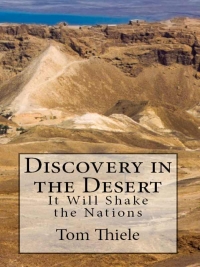 Originality – 5/5
Writing Style – 3/5
Plot – 2/5
Characters – 5/5
Aesthetics – 3/5
What if we discovered another book of the Bible? What if one of us had to go back in time to write it?
David Hart did just that. He’s been working on NASA’s time travel project and now he gets to meet Jesus Himself! What would Jesus say to someone from our generation?
Discovery in the Desert is an interesting idea, filled with great theology and poignant messages for today’s world.
The problem comes with the plot. Tom summarizes and glosses over some of the most potentially exciting scenes in the book and problems that the characters face are dealt with too quickly and easily. We don’t really see the characters being put into any real danger or having to deal with difficult problems. Everything is taken care of in the tidiest way possible, which makes for a rather unclimactic read.
The message of the book is one of its strongest points, but all of the theological discussions seem to come in big, long chunks. There’s no pacing so it reads more like a sermon than a sci-fi story at those points.
There is also a bit of needless cursing in the book. I’m not sure why such an edifying book would include swearing, but there it is.
All in all, if you’re looking for a book with a great message set against an interesting idea, Discovery in the Desert is it. Just don’t expect too much of the plot. I give this book a recommendation of Average.
Discovery in the Desert: It Will Shake the Nations is available in print and e-book formats at Amazon.com.
Visit Tom’s website!
Get more reviews at Christian Sci-Fi and Fantasy Review!

Read it free or order your copy at
The Gifted Book Series!
Posted by Rev. Stephen R. Wilson at 11:51 AM

Email ThisBlogThis!Share to TwitterShare to FacebookShare to Pinterest
Labels: Christian Sci-fi, Christian science-fiction, Discovery in the Desert: It Will Shake the Nations, Tom Thiele