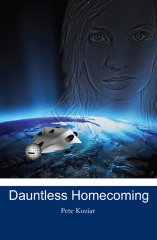 Spaceships. Angels. Demons. Mythical creatures. Adventure. Redemption.
Imagine you’ve been away from earth for hundreds of years on a space mission and when you came back, you found that Jesus had returned in your absence and was now reigning as King over the entire planet. How would the world be different? How would you react? What would happen to you if you had been a believer before you left? What would happen if you had been an atheist or believer in a religion other than Christianity? Would everyone in the world now be perfect Christians? Would everyone be believers at all?
These are the questions pastor/rabbi Pete Koziar poses in his debut novel, Dauntless Homecoming. It is a Biblically imaginative tale with non-stop adventure and illuminating characters.  The writing is clear and natural and the message of hope is unmistakable. Any Christian reader will be pleased with this novel.
There were a couple of small problems with the novel, though. One is that the end is somewhat predictable. I mean we’re talking about Jesus here. We know that no matter what our characters do, nothing is ever going to dethrone Him or His governors from power. Secondly, I found Cliff Harper, captain of the returning spacecraft and main instigator of the problems in this novel, to be somewhat of a shallow character. We’re never really told why he reacts so strongly or holds so tenaciously to his wrong-headed ideals. Also, there are a few places where the editing and proofreading of this novel could have been better. Some of the punctuation is a bit awkward. Finally, the cover is just not that impressive. It would have been very nice if it were not for the rather amateurish-looking spaceship on the front.
All that being said, I did enjoy the novel and am giving Dauntless Homecoming an overall recommendation of Good.
Dauntless Homecoming is available in print as an Ebook from Amazon.com.
Visit Pete's website!
Get more reviews at Christian Sci-Fi and Fantasy Review!

Read it free or order your copy at
The Gifted Book Series!
Posted by Rev. Stephen R. Wilson at 8:58 PM