"Dark Side of the Moon" by Terri Lynn Main Book Review 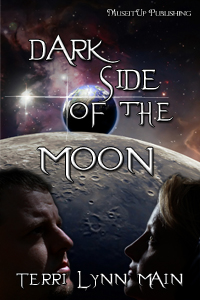 A solid landing for this lunar murder mystery!

Humanity has finally colonized the moon…but the people of the moon may not want to remain as colonists. When the leader of the Lunar Independence movement is murdered, two very different college professors are suddenly tasked with finding the culprit.

The story is told entirely from the point of view of Professor Carolyn Masters, a widely-experienced, middle-aged bachelorette in seek of a change. But when she takes a job teaching at Armstrong University on the moon, she soon finds that her new location has actually brought her closer to her past than she would have liked as she is soon thrown into the middle of a murder investigation.

Terri Main’s story-telling is imaginative and realistic. Her characters are varied, profound, and easy to relate to. And the manner in which faith intersects with life in this novel is superbly natural.

With plenty of twists, turns, romance, and intrigue, this is a book that will appeal to both sci-fi enthusiasts and mystery lovers alike. I give it a recommendation of Excellent and will certainly look forward to Terri’s next offering.

Dark Side of the Moon is available as an Ebook from MuseItUp Publishing.

Read it free or order your copy at
The Gifted Book Series!
Posted by Rev. Stephen R. Wilson at 8:39 PM