"The Cellar Beneath the Cellar" by Lee Duigon Book Review 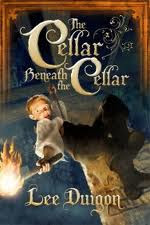 If you’re not reading Lee Duigon’s Bell Mountain series, you need to be! It’s absolutely one of the best out there!

In this amazing second volume, The Cellar Beneath the Cellar, First Prester Reesh, the leader of the entire organized “Church”, is purposely misinterpreting Scripture to serve his own ends while a barbarian army streams into Obann, hungry for the slaughter.

Meanwhile, the Bell has rung and God has continued to call His chosen ones to a great and final purpose. He is speaking through the Toddler Prophet, has gifted the Old Man Missionary, has strengthened the Flail of the Lord, has commissioned the Finders of Lost Scripture, and has anointed the Boy King.

With so much going on, The Cellar Beneath the Cellar can’t fail to be an intriguing read for any fantasy-lover. Lee’s writing is refined, his characters deep, his action non-stop, and his vision big. This is indeed an epic worth following.

It all starts with Bell Mountain, continues in The Cellar Beneath the Cellar, and then on into the soon-to-be-released The Thunder King. I can’t wait for it to come out!

Okay, I’m done gushing, but as you can tell, I’m giving The Cellar Beneath the Cellar a big recommendation of Excellent and personally guarantee that this will be one of the best series you’ve ever read. Check it out today!

The Cellar Beneath the Cellar is available in print from Amazon.com.
Visit Lee’s website!
Get more reviews at Christian Sci-Fi and Fantasy Review!

Read it free or order your copy at
The Gifted Book Series!
Posted by Rev. Stephen R. Wilson at 8:55 PM