"Calamity's Child: A Novel of the Frontier" by M. Keaton Book Review 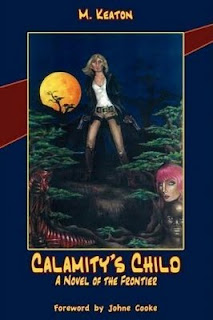 With humorous dialogue, an interesting back-plot, and memorable characters who grow in depth as the story unfolds, this book is sure to satisfy any reader interested in science fiction.

The plot opens with two bounty hunters, human Ivan Steponovich and two-ton alien insect Red Dog, being sent on a mission by their smuggler-turned-crusader employer to rescue a young girl from her own imaginative memories of ‘the devil’. The devil in this case is master criminal Edgar Casey, and the bounty hunters’ mission to rescue this latest victim of his is just one more step in their long war against him, a war that is finally brought to an end at the story’s conclusion.

Whereas Calamity’s Child is written by a Christian author and published by a Christian company, you will not find much in the way of Christian content in this book, besides a few references to Biblical names and characters. There is, however, a very natural and insightful discussion between two characters regarding the existence of God and the reason for His allowing bad things to happen, which I’m sure any Christian reader will appreciate.

For the more conservatively-minded, the book does contain a lot of death and violence and a good bit of mild cursing. Beware.

The only real complaint I have with this book, however, lies not with the author, but with the cover art. The picture does feature some of the main characters, but the art is simply not as impressive as one would desire. In other words, don’t judge this book by its cover!

Again, my recommendation for this book is Excellent and I will certainly look forward to any future novels Mr. Keaton may be willing to offer us.

Read it free or order your copy at
The Gifted Book Series!
Posted by Rev. Stephen R. Wilson at 8:30 PM