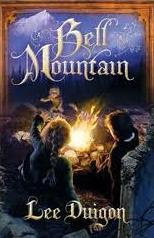 God is at work in Obann.
A thousand years ago, King Ozias, the last king, placed a bell on top of Mount Yul. Scripture says that when someone rings that bell, God will hear it.
But no one ever has rung the bell. Until now.
Many people, from the head priest to a small-town teacher, have felt God stirring their heart to ring it, but the only ones obedient enough to answer that call are two children – Jack and Ellayne.
Jack is a poor boy, a child of misfortune; Ellayne is a rich girl, child of the town’s chief councilor. Together they will make it to the top of the mountain and fulfill their calling.
Bell Mountain is such a fun read for people of all ages. It’s interesting and moves at a quick pace with lots of action and adventure. As you read, you’ll meet new creatures, an expert assassin, Helki the Rod, Obst the Hermit, and Wytt the…? (Well, you’ll just have to read about Wytt.)
It’s a perfectly clean read with a ton of depth and good Christian messages. One of my favorite themes was the question of how we should treat Scripture. Is it to be taken at face-value and treated seriously, or is it just a collection of myths and metaphors?
I give Bell Mountain an enthusiastic recommendation of Excellent and will look forward to diving into the sequel, The Cellar Beneath the Cellar.
Bell Mountain is available in print from Amazon.com.
Visit Lee’s website!
Get more reviews at Christian Sci-Fi and Fantasy Review!

Read it free or order your copy at
The Gifted Book Series!
Posted by Rev. Stephen R. Wilson at 11:30 AM