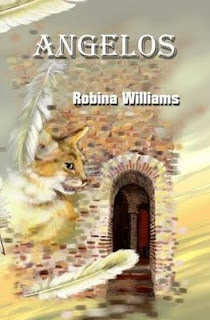 There’s a new Guardian in town…and the friars aren’t going to like it.
Also, the deceased Brother Jerome gets “teleported” to a new town and he isn’t going to like it much either.
Angelos, book two in Robina Williams’ Quantum Cat series, finds Father Fidelis being transferred to a new assignment and a new troubled priest taking up the reigns of the friary. The new guardian, Father Aidan, has been feeling distant from God lately as he experiences what has classically been referred to as “that dark night of the soul.” What will he do to keep himself and his fellow monks on the right path? Will he be able to find God’s presence again?
Meanwhile, Brother Jerome, the dead friar who occasionally stops back in at the friary for a visit around his old home or a chat with friends, finds himself suddenly whisked away to a dark maze of concrete tunnels, filled with dead men’s bones. He is in the lair of the Minotaur! And, equally unhappy at his change in location, the Minotaur finds himself waking up in the friary’s shed.
Robina spins humor, sensitivity, deep spiritual insight, and a Christianized version of classical mythology into this amusing and thought-provoking exploration of the inner and outer spiritual realms.
(There is some use of taking the Lord’s name in vain and some mild cursing.)
Overall, I give Angelos a strong recommendation of Good. The Quantum Cat series starts with Jerome and the Seraph and follows Angelos with the third book, Gaea.
Angelos is available from Twilight Times Books.
Visit Robina's website!
Get more reviews at Christian Sci-Fi and Fantasy Review!

Read it free or order your copy at
The Gifted Book Series!
Posted by Rev. Stephen R. Wilson at 9:33 AM